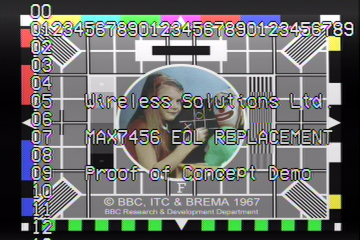 A frequent problem for small volume products in the long run is End-of-Life (EOL) components.

Often passive components can be replaced with similar parts from alternative suppliers, or new component ranges, with minimal effort.

Often the original hardware and software engineering team are not available to assist with any redesign work, which may multiply the problems encountered.

A client had a product which had been selling steadily for several years, but No-Longer-Available (NLA) parts were increasingly causing headaches. WSL had previously made several design changes to accomodate EOL parts in the unit, but sales volumes would not support the cost of a full redesign activity.

The product featured an analogue PAL video output, with On Screen Display (OSD) provided using a MAX7456 OSD generator IC produced by Maxim Integrated, but this part is now EOL. The customer secured a 'lifetime buy' of components sufficient to support production for the immediate future.

As a Proof of Concept, WSL designed a microcontroller based OSD generator intended to emulate as far as possible the software interface of the original device. The intention was to avoid any issues with legacy firmware, and limit the design changes required to the hardware side of the existing product.

The prototype was designed, built and tested in two weeks and produces a video output palette matching the original design, including character shadow outline and customisable character sets. As the final design would be designed into another pcb, this prototype is sized to allow rapid development, and does not represent the minimum pcb area required for a real world implementation.